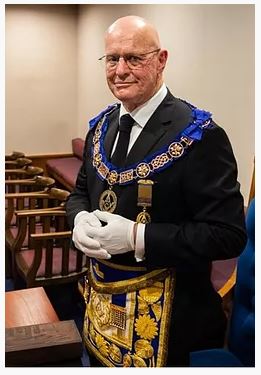 Warren was born in 1951 in Auckland and raised by his adoptive parents in Wätea on the shores of the Manukau harbour. It was a small rural community of less than fifty houses and was largely made up of retired First and Second World War Veterans, their wives, and families. As one of the few children in this community he grew up with a wonderful number of very eccentric “Aunties and Uncles” with stories of sea captains “putting down Mutinies”, life in the Imperial Chinese Palace, First World War Navel engagements, survival in the trenches, major tank engagements, life in Northern India, Ireland and in the Highlands. Church was in a small country chapel with a hitching rail still out the front for horses to be tethered. The lead from the roof had been taken to make musket balls during the land wars.

Warren’s schooling was at Mangere Central Country School and Onehunga High School. At OHS he was in the first 15 rugby team and was Auckland’s inter-school shotput champion. Holidays were spent hiking in the bush of the Hunua ranges, weeklong bike rides, or canoeing about the upper reaches of the Manukau harbour.   Generally having unsupervised boys’ own adventures in all school holidays.

The eldest of ten in his birth family (five sisters and four brothers) he was the eldest of two in his adopted family having a younger sister.   He has strong relationships with both families with over 69 nephews and nieces.

Remarried in 2001 to Jan, a Nurse Specialist at the Starship hospital, specialising in Cystic Fibrosis.

In 1968 Warren joined the NZ Post office as a Telecommunication Technician, becoming a specialist in long distant communication.  He worked all over NZ including the National underwater cable centre, the National Transmission centre and assisted in the building and operation of the Warkworth satellite station.  His work involved being part of both military and civil communications.

In 1974 he joined the NZ Police and has held the positions of Police Constable, Police Sergeant and Sworn Police Prosecutor. His current role is Non-Sworn member in Charge of the Auckland Diversion Program.

At a District level Warren has been the Past Grand Assistant Director of Ceremonies in the Craft and Past District Grand Registrar in the Royal Arch.

His other masonic duties have been:

– President of the Board of General Purposes, 7yrs

Warren has a strong sense of community and sees the benefit of freemasonry being extended beyond the men in the lodge to their families and the wider community. Throughout his career in the Police force and during his time on the North Island Masonic District Charitable Trust he has seen the need for practising charity in the community and wishes to extend the masonic reach.

In his spare time Warren’s first priority is Family. He and Jan enjoy all the time they can arrange with them  (especially their amazing grandchildren).

A large vegetable garden to potter in, water colour painting in the house truck (the Wandering Albatross), he likes painting seascapes, finishing writing & Illustrating a children’s book and building a model railway together with grandchildren (a very long-term project) are a few of his favourite pastimes.

Travelling to other countries to endorse his love of everything historical Warren can immerse himself in a country’s customs, food and culture.  Warren and Jan have travelled extensively throughout the world with countries in the Middle East being the most memorable.   Tracking down ruined castles, prehistoric sites, battlefields and museums are his specialities with his greatest passion being archaeology and human evolution. 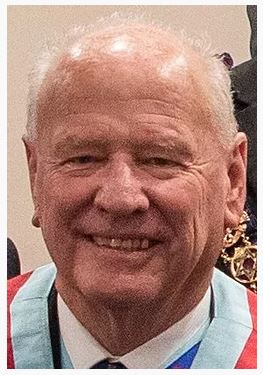 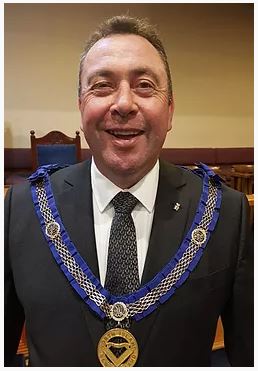 Euan was born and raised in Inverness, in the Highlands of Scotland. He describes his childhood as being akin to an Enid Blyton novel – the sun always shone, time was spent outdoors, fishing, on bike rides or playing games and nothing bad ever happened to anyone. Through membership of The Boys Brigade he developed a sense of service, spirituality and a passion for sport.

Freemasonry was something that he was aware off without understanding what it was. In retrospect it seems that most males in his dad’s circle of friends were Freemasons.

At 18 years old he was accepted as a cadet in The Metropolitan Police and on a snowy day in March 1987 boarded a plane and swapped the hills and glens of the Highlands for the streets and tower blocks of London. He served predominantly in South London within the Criminal Investigation Department and on associated Crime Squads.

On 16 November 1992 Euan was Initiated into The Wandle Lodge 2699 at Freemasons Hall, Great Queen Street, London and took the first steps on his Masonic journey.

He met his wife, Angela through mutual friends in 1999 and they married in 2003. They decided to emigrate to New Zealand and did so in January 1997. They have two sons, James and David who are both Kiwi’s. After trying his hand at various jobs Euan returned to Investigative roles and currently works for IAG Insurance.

Arriving in New Zealand and wishing to continue in English Freemasonry, he attended a meeting of The Eden Lodge 1530. There he met W. Bro’s Graeme McKandry and Henry Grocock, visiting from The Prince of Wales’ Lodge 1338. Over an asparagus roll and can or two of Lion Red in refectory he was persuaded to join them on a tour of English Lodges in the Auckland area. This resulted in him joining The Prince of Wales’s Lodge on 8 May 1997.

He has served two terms as Master of The Prince of Wales’ Lodge 1338, in 2005 and again in 2009. He is also a member of Auckland Chapter 1338 where he has served three terms as First Principal.

In his spare time Euan enjoys cooking for family and friends, golf, fishing and to Angela’s annoyance, watching any form of sport on television 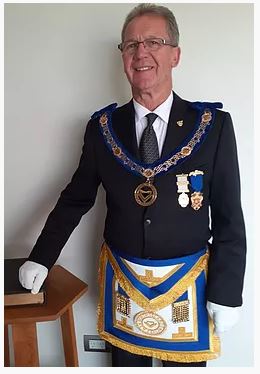 David was raised in Ayrshire on the west coast of Scotland. Things weren’t always easy but he had a childhood he wouldn’t have swapped for the world.

The boys Brigade had a big influence, teaching morality and respect, and there was always a game of soccer on a Saturday morning. David attended Irvine Royal Academy – as did Edgar Alan Poe for a short period – but he has a distinct feeling Edgar is better known.

Through a friend who belonged to the Craft he joined the Scottish Constitution in 1972, being initiated into St Matthew Kilwinning Dreghorn No. 549. Emigrating to New Zealand in 1973 with his wife Joyce and sons Mark and Tony, David continued in the motor trade for seven years before purchasing and operating his own mechanical workshop until 2016, when he retired.

He joined the Duke of Albany Lodge in Helensville in 1982, becoming their Master in 1988 and Master of the Mark Lodge in 1989. David is also a Royal Arch Mason. His other Masonic passion is visiting other Lodges.

Hobbies include motor caravanning, cooking, and of course hitting that small white ball round the golf course. 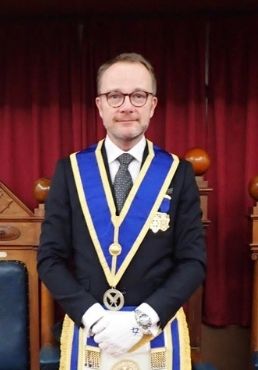 I was Initiated into Masonry in London at Absalom at Home Lodge No. 8382 that meets at Great Queen Street in 2007.  Shortly after I was Raised, I emigrated to New Zealand following my wife who is a New Zealand diplomat.

After a brief time in Wellington (joining Wellington Lodge No. 1521 and being Exalted into Aorangi Chapter No. 2300) we moved to Pretoria, South Africa, where I served as Worshipful Master of Corinthian Lodge No. 7251, 2013-14.  I also joined Pretoria United Chapter No. 6017; joined the Order of the Secret Monitor, going through the Chair and serving two years as DAGDC, and also the Rose Croix.

After four years there, we moved to Port Vila in Vanuatu.  As a PM, I was looking forward to a spell in the East but was asked to take on the DC role at Lodge of Discovery No. 8737.  This was a great opportunity and I had the privilege of fulfilling this role for three years.  Recently on a return trip, local members along with Companions from New Zealand and further afield Consecrated a Chapter for the Lodge – Chapter of Discovery.

Once we returned to New Zealand, this time to Auckland, I joined Eden Lodge and Chapter No. 1530, going through the Chair in both.  Since my wife is from the East Coast I also joined Turanganui Lodge No. 1480 in Gisborne, becoming Master in 2019.

Early in 2021 I once again took on an opportunity, this time as the District Secretary.  This role acts as the liaison between the lodges/chapters and the District, and also up to London.  I am here to assist the local secretaries in fulfilling their roles.

Be courteous to all, but intimate with few, and let those few be well tried before you give them your confidence. True friendship is a plant of slow growth, and must undergo and withstand the shocks of adversity before it is entitled to appellation.

It was with the greatest sadness that the United Grand Lodge of England learned of the death of Her Majesty Queen Elizabeth II, our longest serving British Sovereign.

Queen Elizabeth’s father, His late Majesty King George VI and her consort, HRH The Duke of Edinburgh, were both Freemasons.  Her cousin, HRH The Duke of Kent, has been Grand Master of the United Grand Lodge of England since 1967, and will be sending a message of condolence on behalf of all English Freemasons to His Majesty The King.  Another of her cousins, HRH Prince Michael of Kent, has been Grand Master of the Grand Lodge of Mark Master Masons of England and Wales since 1982, and an announcement is being made from Mark Masons’ Hall.

God Save The King.